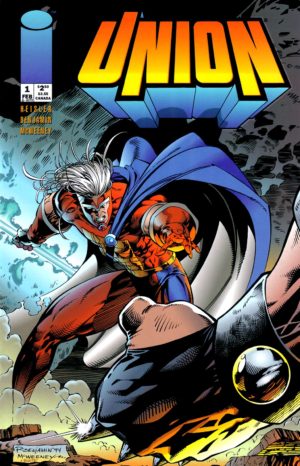 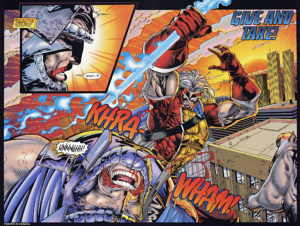 Need the issues? These issues have never before been collected! For single issues – try eBay (#1-3) or Amazon (#1, 2, 3). Since the prior Union series hit these same issue numbers, be sure to match your purchase to the cover images in this post. You can also pick up Supreme #14 (eBay / Amazon). The Crusade story originally appeared in the Killer Instinct Tourbook and is reprinted in WildStorm Rarities (eBay / Amazon), a perfect-bound book with a spine. 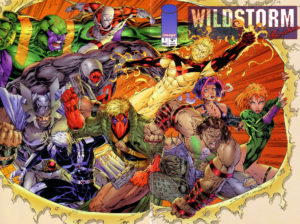 Union #1 comes with some required pre-reading other than Union’s original limited series – the Crusade story in WildStorm Rarities and Supreme #14.

WildStorm Rarities includes the Crusade story “Released. It originally appeared in the Killer Instinct Tourbook, plotted by Jim Lee, Sean Ruffner, and the mysterious H.K. Proger with Union’s Ryan Benjamin on art. The Voyager One spacecraft collides head on with a meteor, freeing Crusade from centuries of imprisonment. We have no hint of whether he’s good or evil, but he’s religious and enjoys sunshine. His meteor is littered with the shattered armor of his former compatriots, and he swears vengeance on the “monsters” who killed them. 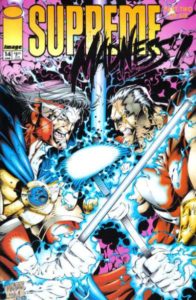 Supreme #14 could easily be called Union #.5. It’s a decent recap of Ohmen’s story and his ideals while it bears very little plot for Supreme, other than that he’s lost his mind and taken out several square blocks of Washington in his ensuing rage. Ohmen is in town with Jill for a day of art museums but feels honor-bound to assist with the wreckage Supreme leaves in his wake – which makes him a target for Supreme as he circles back around.

The two super men battle each other to a near standstill before Ohmen realizes how much collateral damage they stand to cause if they keep up the fight. He briefly relinquishes his staff, allowing Supreme to get in a cheap shot that looks to be deadly so he’ll fly away. 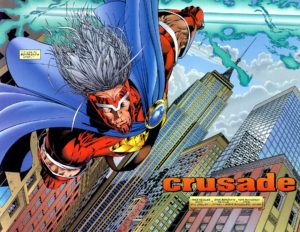 Union #1 opens with a brief interlude in the Tibetan mountains, where the egg-headed Mnemo finds the hulking Crusade knocking on his door. Halfway around the globe, Ohmen and Jill living in New York City. Jill is waitressing at a dive with a misogynist boss and Ohmen is struggling to figure out how to turn his super-powers and penchant for breaking up super-powered standoffs into a paying job. His profile is considerably higher now after his run-in with Supreme, and not in a positive way.

That’s why Ohmen has set a meeting Synergy (who is currently Weatherman at some point after Battalion’s death) – he needs help with a secret identity so he can find employment. Synergy demurs on the identity, but agrees to keep Ohmen on retainer in exchange for him being on-call to assist Stormwatch. Ohmen returns to the dingy apartment he shares with Jill to tell her the news, but through the window they spot a pair of flying figures locked in combat – and one is wielding a Justice staff.

That is Union’s best friend, Serren, who mysteriously disappeared from his home dimension. They have no time to catch up, as Serren is locked in a vicious battle with the Thor-like Crusade. What Ohmen does not realize is that Serren is a puppet of Mnemo, and he’s playing double duty in distracting Crusade and outing Ohmen.

Ohmen realizes someone is pulling his friend’s strings. He stops to question Serren, but they’re both caught by surprise by a resurgent Crusade, who sends Serren crashing to his apparent death and Ohmen into unconsciousness. 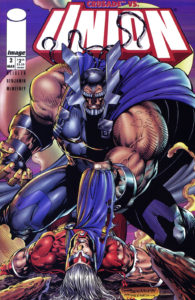 Union #2 begins just seconds later, with an awakened Ohmen taking the fight to Crusade in the sky. Meanwhile, on the ground, Jill reaches Serren’s supine form and is surprised to discover that he’s still alive! The three super men meet in the sky, and Serren seems to have shaken free of Mnemo’s control. Ohmen calls a truce, which gives us the amusing image of these three impossibly massive men sitting around a Jill’s kitchen table.

Together, Ohmen, Serren, and Crusade realize they have a foe in common – Mnemo!
They spend an entire day flying around the world to reach his lair in the Himalayan mountains, where Ohmen has to convince Crusade not to swat down C 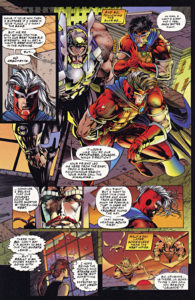 hinese air force craft who are acting reasonably to defend their airspace. When the three find their way into Mnemo’s base, the villain holds Serren hostage in a brief, tense standoff. He eventually throws Serren’s body down to cover his escape, but not before he removes modifications he made to Serren’s staff and stone so that they could function on Earth (remember, Union’s stone got altered on the journey and merged with a Directorate stone).

Ohmen flies Serren up into space, where he explodes into nothingness. He recaps it all for Jill back at their apartment, including how he parted ways with the self-righteous Crusade. Their conversation is interrupted by a phone call – Synergy is activating Union for service with Stormwatch! 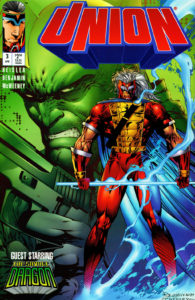 We don’t get to see that mission in Union #3 – we just flash to the resulting paycheck and flight to Chicago to visit Jill’s college friend Kath. They are happy to see each other and do tourist things, but Ohmen is hopelessly morose, and it’s hard to tell if it’s because he is mourning for Serren or because regular life is so dull to him. Probably both.

Kath insists that Ohmen just needs a few drinks to loosen up, which Kath seems to sense is going to be a disaster. It’s hard to tell if the drinks make a difference when Savage Dragon crashes in through the bar’s window and Ohmen assaults him, assuming him to be a monster. That’s what Ohmen would do on a regular day, right? He’s quickly informed by the bar’s patrons that Dragon is a cop. Ohmen apologizes, takes a slug in the jug from Dragon, and then goes overboard helping him apprehend his subjects – sending their car into a fiery crash.

Drunk Ohmen is still an incorrigible do-gooder, and he insinuates himself as Savage Dragon’s partner for the night to help him bust the gun-running ring he was staking out. They handily take down an armed penthouse full of armored mobsters, by which point Dragon has warmed up to Ohmen enough to buy him a drink (at a strip club). Drunk Ohmen is effectively a toddler who thinks everything is fascinating or funny.