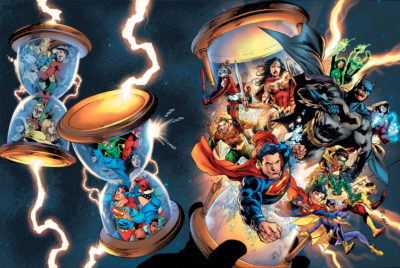 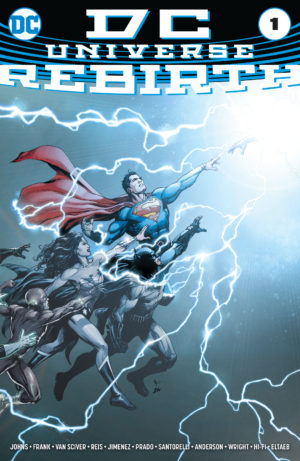 Like the Ghost of The Fastest Christmas Ever, he first visits Batman (he’s the best detective!), an old guy named Johnny (he has the best chance to remember things!), and his former partner Linda (love will bind them together!), each without much success. Finally, he says hello from the other side to current flash Barry Allen (super-bros FTW!). 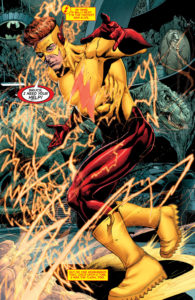 West also observes a lot of other action in the DC universe – significantly, the moment of Darkseid’s birth, the Atom sending a distress call, Green Arrow and Black Canary’s estrangement due to their relationship falling into the forgotten decade, Aquaman proposing to Mera, an older Superman and Lois and their son in hiding, the current reality’s black version of Wally West, and New 52 human McGuffin Pandora being evaporated in a blast of curiously familiar blue light.

It’s no mistake that DC picked Wally West as their narrator. The Flash television series posts gangbuster ratings and has a legion of online fans. That means there is a reading public out there acquainted with Flash that’s almost 100x bigger than this issue’s print run! They’ve been introduced to the the Speed Force, parallel universes, and time paradoxes.

Heck, they even know who Barry and Wally are, which puts them one up on me on a typical day! As someone who hasn’t read or kept up with DC for half a decade and who never read Flash outside of New 52, I found myself doing a lot of nodding and saying, “Mm-hm, sure.”

I was able to keep up because DC’s master scripter Geoff Johns delivers just the right amount of exposition in West’s voiceover. Established readers will delight in hearing West’s voice, while newer ones can use his recapitulation as a cheat sheet. West is bewildered enough by his struggles that his narration has a slightly disjointed quality, which prevents it from being overbearing.

None of the other characters gets a particularly meaty scene save for The Atom and his accomplice Ryan Choi. I didn’t know much about The Atom going in, but coming out of the issue it’s one of the plots I’m most eager to follow. 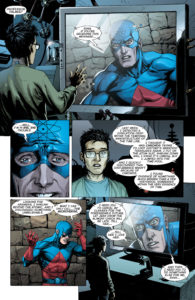 Batman has less to do, but gets two tantalizing mysteries left in his lap – one about the Joker and another about the source of the timeline shenanigans. Both left me breathless for more details. Given the embarrassment of riches in Batman’s plots over the past 10 years, I’m surprised that the big timeline reveal wasn’t left for another character who could use more of a boost, like Aquaman or Cyborg.

The artwork might be a stronger hook than the story for newer comic readers, who won’t be as thrilled by these story nuances. DC put a strong foot forward with Ethan Van Sciver, Ivan Reis, Phil Jimenez, and Gary Frank. While it’s a bummer not to see A-listers like Capullo or Finch, it’s hard for anything – even the consistent Ivan Reis – to hold a candle to Ethan Van Sciver’s spectacular introductory chapter. Van Sciver is almost always sublime, but Gary Frank also stood out to me – he recalls a rougher Leinil Yu.

If there is a weak spot, it could be the colors. I say “could,” because it’s a sensitive and hugely subjective topic. DC has a consistent house style of coloring that tends to opt for slick, bold, colors on almost all of their titles outside of Batman. It’s great style for flashy sequences like Wally being trapped in The Speed Force, but fail on darker and more-nuanced moments. The oversaturated palette repeatedly veers into the tacky look of a lower-budget indie comic, with lumpy facial features and flesh tones that verge on sickly orange.

Does this issue make me excited to dive more deeply into Rebirth? Only because of its final panels teasing a connection to another storied DC franchise. Without those, the only aspects of this that feel like a teaser for the future rather than an apology for the past are the mysterious Batman sequences and the brief interlude with Lois and Clark.

Less well-acquainted readers should feel free to leap right to the Rebirth special of their favorite characters, like Batman, Superman, or Wonder Woman – and I’ll be doing just that in subsequent posts!