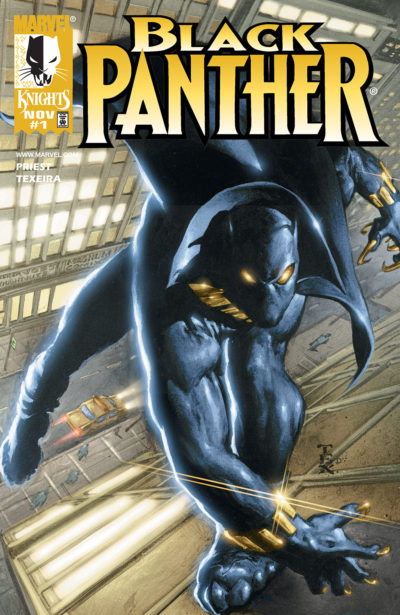 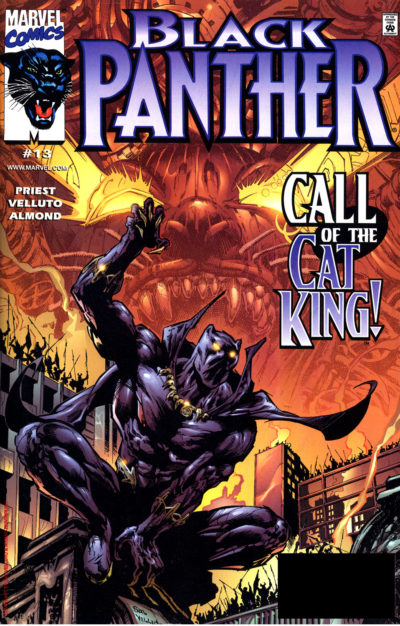 Or, at least, it becomes good comics. The first four issues, co-plotted by Joe Quesada, are a comedic muddle of cross-cut, non-linear story-telling that barely star T’Challa. I could see them putting a lot of readers off of this series.

Priest’s concept saw T’Challa in America as a foreign diplomat who had no intentions of putting away his superhero mantle while on US soil. It was the job of dweeby State Department employee Everett K. Ross to accompany this visiting head of state. It’s through Ross’s eyes that we watch T’Challa’s modern adventures unfold during the initial run of this series that would be covered by this omnibus.

It’s a strange and utterly correct choice by Priest. Ross injects the book with humor, not only of his own creation but in how he views the fantastical Black Panther and his entourage. The fractured narrative gradually (but never completely) settles down after the first handful of issues to follow a more discernable, chronological form of storytelling. That gives Ross’s humor more time to land. At points, his farcical commentary over a series of super-powered classes reaches a similar territory to Deadpool (which Priest briefly penned in this period, including a crossover with Black Panther).

Never before had a writer dissected T’Challa’s roles as a monarch, a hero, and a foreign agent in the decidedly All-American Avengers. Seeing it from an outside point-of-view emphasizes Panther as one of Marvel’s most otherworldly creations even if he is just a man who doesn’t wear colorful spandex or wield explosive super-powers. It also exposed the constant duality of T’Challa’s existence – loyal to his fellow heroes, but never at the cost of his own people.

You can read Priest’s own commentary on the series, which is much more of an advertisement for this run than anything else I can say for it. It includes a lot of behind-the-scenes details of the run, including the editorial push-and-pull behind Priests’s use of the non-linear narrative and in tying in with the concurrent Kurt Busiek run of Avengers.

What I can say for Priest is that he’s the best kind of challenging comics writer – one who breaks the rules of the medium only because he knows them so well and can employ them so thoroughly when the situation is right. His relative disappearance from comics for a decade starting in 2005 is a disservice to fans and characters everywhere, which is what makes his current run on DC Rebirth’s Deathstroke such a delight. 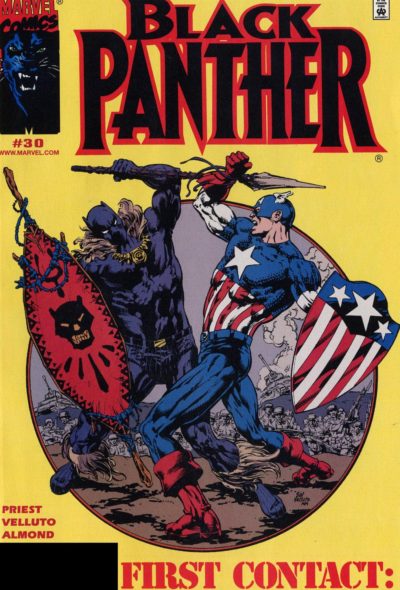 If you enjoy the modern Ta’Nehisi Coates take on Panther then definitely read Priest’s Panther, as it’s massively rooted in his run.

Weirdly, if you like Deadpool – either in the 90s or in Marvel Now – you should also try Priest’s Panther.

The only person I’d say shouldn’t necessarily leap at the chance at trying Priest’s Panther might be the most plentiful: fans of the Marvel Cinematic Universe who are eager for his 2018 film.

Priest’s run might be a little to deconstructionist for a relatively newer comics reader – I might direct those fans first to the initial portion of Hudlin’s subsequent run, or the later Maberry issues which feature more straight-up superheroism.

Marvel has waited less time to issue Omnibuses after Complete Collections in the past. Plus, even if this material is challenging, it’s still unquestionably the best Black Panther they’ve got to appeal to a wide audience of fans from both the comics and the films.

Would I recommend buying it? I think you should buy the run, but not necessarily the omnibus.

Personally, I might recommend the pair of cheaper Complete Collections to you if you’re unfamiliar with this run, as it’s not necessarily for everyone. But, if omnibuses are your thing, you should definitely buy it.