And you know what? It’s still every bit as great today – even moreso after spending the past two weeks reading all of the comics that lead up to it. 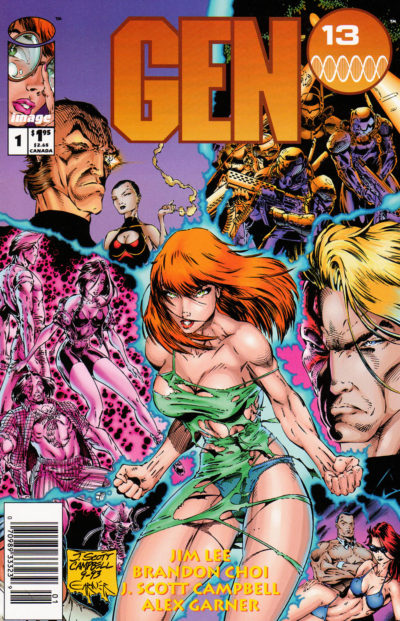 The cast of Gen13 were some of Jim Lee’s final creations in the early years of WildStorm. In an interview in Gen13 #1/2, he discusses being motivated to move away from the gear-laden extreme look (and the violence that accompanies it) that many classic characters at Marvel and DC were moving towards. (The irony of the entire team wielding guns on the cover from Lee is not lost on me). He also intentionally created Caitlin Fairchild as a literal strong female who was also super-smart – an obvious choice to lead the team.

It’s Lee’s focus on creating a different book rather than an imitation of something familiar that makes Gen13 so memorable. Caitlin Fairchild may not yet be a Tony Stark level genius, but her hairpin turn from ingénue to terrorist and leader never seems rushed given the breadth of her intellect and depth of her drive. It’s the same way almost all of Marvel’s original generation of male heroes are depicted as super-brains of some sort to explain their mastery of all things. Marvel has scant women who fit the same mold (at the time, just Mockingbird and Kitty Pryde), and none who also lead a team.

(Lee also included a buff, masculine, hyper-sexual Asian male with Grunge (a rarity even today) and an indigenous woman with Rainmaker who… well, we’ll get to that later.)

If we’re going to talk about the unique touches that make this book stand out, we have to discuss artist J. Scott Campbell. Campbell was discovered at age 19 in the talent search advertised in WildC.A.T.s #2! Prior to Gen13, his only published comics work was portions of Stormwatch #0, Deathmate Black, and pin-ups.

To go from obscurity to co-creating one of the most popular mini-series of the 90s is unbelievable. His achievement is made more incredible by the fact that he’s not specifically aping any single Image founder. Campbell draws distended, hyper-tall figures like Liefeld, he details muscles and clothes like Lee, and he has the fussy sketch lines of Silvestri. Campbell’s characters are all visually distinct and exciting as regular people wearing clothes, and his backgrounds and buildings are bristling with detail.

To have a 19-year-old designing 19-year-olds is part of the kinetic magic of Gen13. In fact, Lee reveals that Campbell designed Roxy AKA Freefall, who is by far the most visually distinct of all the Gen13 kids. Yes, Campbell errs on the side of some egregious T&A at points, but he’s seemingly just as eager to show nearly-nude men as he is women – he’s a kid who just wants to draw hot kids being hot. Also, the present-day fashion aspect of his pencils is powerful – Roxy the club kid, Caitlin’s mousy Princeton get-up, Bliss’s S&M dresses, Grunge’s early-90s flannels.

Yet, great art alone does not make for a good Image title – or else I’d be head over heels in love with WildCATs instead of constantly dissing it. The script here is wonderful. Brandon Choi was great on Stormwatch, but he was never better on early Image than on this initial run of Gen13 collaborating with Campbell (who picks up a story credit by the third issue). Characters all have distinct voices, details make sense, and each issue has its own rising and falling action. Caitlin Fairchild as our point-of-view character is so analytical that it makes perfect sense for her to issue a recap via narration at the beginning of each issue. 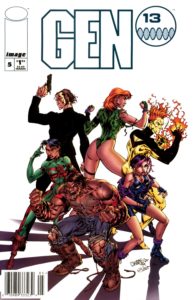 It’s not just the Gen13 kids who make this story interesting, but I.O director John Lynch finally being fleshed out into a dynamic character instead of just a conniving government villain. If you’ve read any WildStorm up to this point, he hasn’t exactly been a sympathetic character (except for maybe in WildCATs #2 when he doesn’t arrest the team). That’s especially true coming from reading Kindred, where he seemed as hugely unsympathetic as ever!

Here we see another side of him. It’s not a sudden turn, but a transformation that makes sense for his character. For all of his heartless decisions over the years, he does have regrets – chief amongst them the raw deal many of his Team 7 teammates got if they didn’t go underground or let I.O. control their lives. That guilt means he cannot in good conscience support a renewed Genesis program – especially one that preys on the children of his teammates!

As I re-read this mini-series, I repeatedly asked myself: Are you seeing this through rose-colored glasses? Is this the joy of nostalgia talking?

I’ll admit a little buzz of returning to these characters, but given the sheer volume of comics I read, I don’t think my delight in Gen13 can be purely attributed to huffing the fumes of the 90s.

This is a good comic book that’s a perfect artifact of the times – even the gratuitous mid-mini-series guest appearance by Pitt.

Want the play-by-play? Keep reading for an extensive summary of this book, a major influence on me and an early inspiration to my 8th Grade version of Krisis. Here’s the schedule for the rest of this month’s WildStorm re-read. Tomorrow we’ll finally make it back around to Deathblow, now with Tim Sale in control of art duties. Will I like it better this time around?

Need the issues? Gen13 was such a massive, game-changing hit that it’s the rare WildStorm book that’s been through several reprints. Here are the three you should focus on:

Keep in mind that as a key issue #1 can be pricey on its own but there were plenty of these printed, so you’ll probably be better served buying a lot of the entire mini-series. Since several future Gen13 series hit these same issue numbers, be sure to match your purchase to the images in this post (note that #5 has two different covers). The Gen13 #1 with 13 different covers is not this #1 – it’s the first issue of their subsequent ongoing. END_OF_DOCUMENT_TOKEN_TO_BE_REPLACED