Get ready – this is my longest and most content-packed video to date!

I begin by recalling what used to scare me as a kid as I unwrap one of the first books I packed back in the states – Shang-Chi, Master of Kung Fu, Volume 2. I unwrap the book from its cellophane and page through live on camera.

This leads me on a lengthy tangent about professional printing processes, including how press sheets word and why expensive books still have printing errors.

Finally, perhaps not realizing how long the episode had already become, I decide to open a random packet of extra books – Image Comics: The Road To Independence, Barrett Stanley’s Heartbreak Quadrant, and the only hard copy version of my novel that exists!

There are three kinds of comic book Kickstarters.

One is from seasoned pros who want to do their own project – perhaps with a set of new intellectual property. A second is from indie creators who have published some work – perhaps digital only – and want to head to print to widen their potential audience. A third is from an unknown – maybe an artist in another medium, or maybe someone publishing their first work.

I’ve pledged to all three kinds of Kickstarters and I’ve seen all three fail. Yet, the first two have a leg up on the third in existing support and goodwill of their audience. You’re not likely to get angry at your favorite creator for telling you their project will be a month late or ten pages shorter than planned. 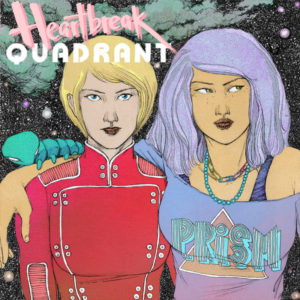 The artists in that third category have no leeway, not an inch of slack. To convert you from one-time speculator to long-term supporter they have this single chance to win you over – to impress you on every level.

I’ve pledged to all three kinds of Kickstarters and I’ve seen all three succeed. Yet, the third are the ones that most often stun me.

Story and art by Barrett Stanley. Buy Heartbreak Quadrant for $15 at the Red Grapefruit online store.

Heartbreak Quadrant is a vivid slice of sci-fi crammed with big ideas but primarily about people.

Ida and Kumi captain their own peculiar spaceship resembling a massive red grapefruit through a post-Earth universe full of genetically tampered-with people who covet the simplicity of artifacts of their old planet. Ida is practical, canny, and loyal. Kumi is impulsive, optimistic, and can be dangerous. As they recover from a job that was tougher than they anticipated (“a little trouble with a candy amplifier”), an old contact reaches out with a hard-to-fill request for the most-coveted artifact of all – a baseline human, or “blank.” END_OF_DOCUMENT_TOKEN_TO_BE_REPLACED