Do you own an oversized tome of the comics starring your favorite character or featuring your favorite story? My Marvel Omnibus & Oversized Hardcover Guide is the most comprehensive tool on the web for tracking Marvel’s hugest releases – it features details on every oversize book, including a rundown of contents and if the volume is still readily available for purchase.

What is it? Black Panther takes the helm of The Avengers in a run full of short, memorable stories. 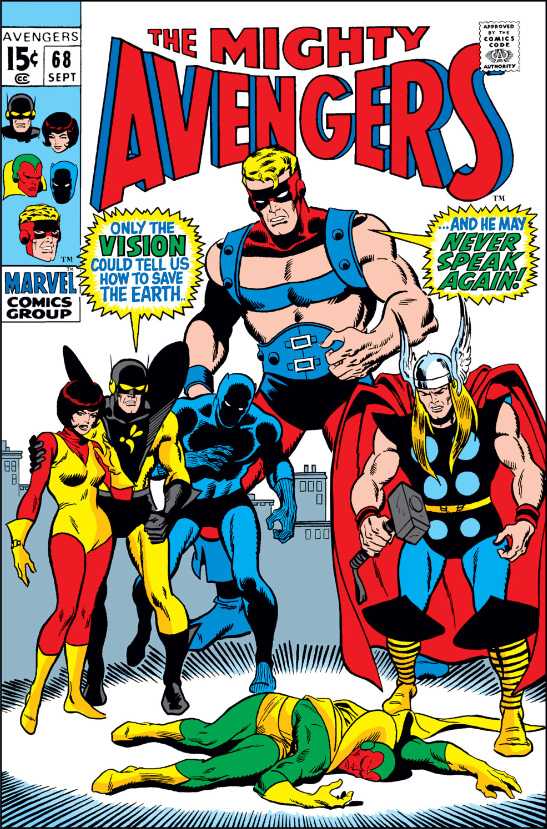 For being Marvel’s indisputable flagship team, The Avengers is curiously low on oversized versions of its original 1963 to 1996 run compared to Uncanny X-Men and Fantastic Four.

We have a pair of classic Avengers Omnibuses released alongside the films, plus a new Byrne book that’s partly Avengers West Coast, the generally reviled The Crossing, and their minor participation in Onslaught. FF has them beat by one, X-Men by three or more (depending on how you count their many oversized pseudo-omnis)

Maybe that’s owing to a general lack of flashy, lengthy, historically-beloved stories in the Avengers run. Without those, Marvel is choosing its battles and releasing these alongside films for maximum sell-through. Does that mean we could be in for a bit of a wait for this next volume.

The primary team in this run is Black Panther, Hawkeye, and Vision, with Wasp, and Yellowjacket earlier in the run tagging out in favor of Quicksilver and Scarlet Witch in the latter half.

This run is full of 2-issue stories, as was the style of the time, so there’s no single thing to highlight. However, there are some historical moments of note in the run, which begins with the wedding of a characteristically unstable Hank Pym and the Wasp.

There’s also Hawkeye’s rather sudden turn into Goliath, a shape-changing heroic mantle he’ll hang onto for several dozen issues. Plus, the introduction of Adamantium, which is not only a big Marvel concept, but allows for Ultron to become a much more fearsome and physical foe in a two-part story. The team also tangles with the Zodiac and a time-traveling Kang. Finally, Thomas introduces Valkyrie in a slightly askew commentary on the women’s lib movement.

The real story here is the development of Black Panther. Roy Thomas did wonderful work with T’Challa as the Avengers chairman – filling in his origin, foregrounding him in a pair of Man-Ape stories, and rebranding Sons of the Serpent as a KKK analogue for a story with Bill Foster. He’s indisputably the main star of this run, even if he doesn’t feature prominently in every story. He happens to depart the team in the final issue.

Ironically, the one surefire, multi-issue hit story the Avengers have – “The Kree/Skrull War” – starts with the next issue! Should Marvel break the “3 MMW per Omni” rule here to include it? I say no. First, it messes with the Black Panther prominence of the title. Also, it would mean the next book gets both Kree/Skrull War plus The Avengers/Defenders War, which is another classic puts even more MCU characters in play to sell the book.

Normally I’d downgrade the chances of seeing this Volume 3 prior to the next Avengers film. However, with this content as one of Black Panther’s biggest Silver Age starring turns, we could wind up seeing it next summer with his film.

Want to read it right now? Visit the Avengers Guide to see how this run has been collected in numerous formats to date.

What is it? The classic Stan Lee and Jack Kirby run that introduced the Silver Age of comics draws to a close. 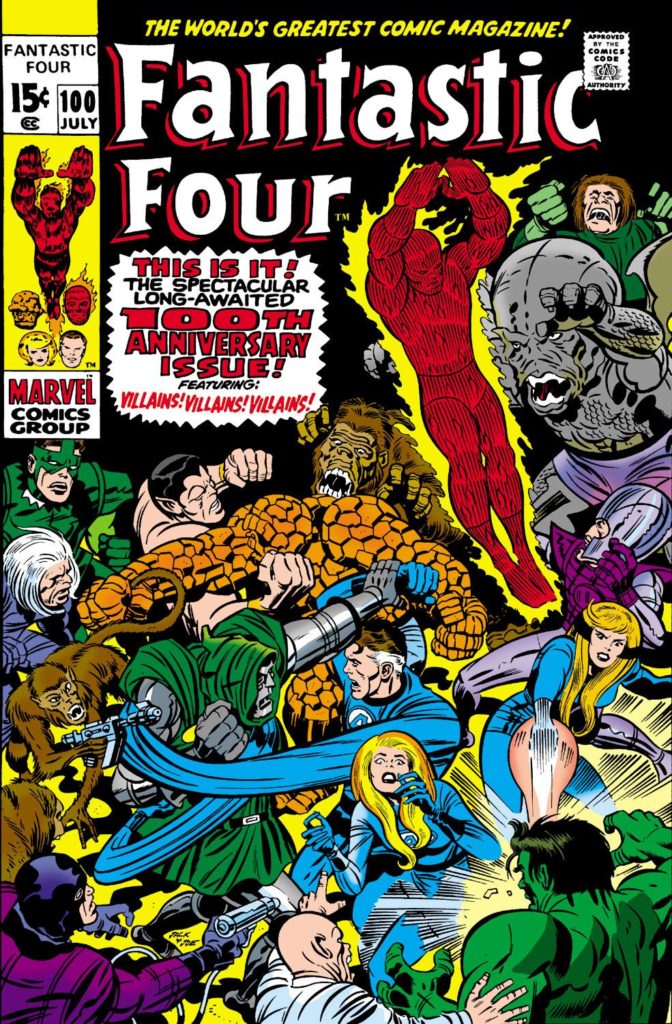 This run starts out with a peculiar adventure – the Fantastic Four choosing a nanny for their newborn son, Franklin Richards! This signals that Susan Richards back into the mix after over two years mostly on the sidelines with an occasional substitution by Crystal.

If the story is peculiar, it is because it represented one of the most prominent examples of Marvel as an interconnected universe that was always growing and changing. Over the course of the proceeding run, Sue and Reed Richards fell in love, became married, and had a child. The relationship enfolded almost in real time, aside from Sue’s prolonged gestation. Such real-life analog events weren’t unknown to comics – after all, it’s a medium that blew up via heroes punching Hilter). On Fantastic Four and Spider-Man, Stan Lee continued to set the standard for the most interesting thing about superheroes being the real lives.

In fact, it’s the romantic relationships of the leads that get foregrounded throughout much of this run over any other detail. Reed and Sue’s relationship continues to deepen as they care for their son. Johnny Storm is head over heels for Crystal, who has powerful abilities but is beholden to her duties with the Inhuman royal family. Ben Grimm is seriously involved with Alicia Masters – even getting to spend some time with her in his human form.

The team also tangles with The Mad Thinker and an army of villainous robots, a Kree plot to foil the moon landing, Annihilus in the negative zone, and even the mob! The Lee/Kirby period ends on a particularly epic, three-issue all-out war against Magneto and Sub-Mariner. That’s not the last Epic from Lee, who has the team ally with Doctor Doom to face off the alien psychic Over-Mind and later face

I think it’s going to be a while before we see the Omnibus that closes out the historic Lee/Kirby run on Fantastic Four (plus adds the end of Lee’s run with Buscema as a penciller, and Roy Thomas as the second scripter).

There are a few reasons. First, we’ve pretty recently received a Volume 3 (in the middle of 2015) and no Silver Age omnibus line has previously ventured to a Volume 4. While Fantastic Four is a good bet to do so considering their strong MMW line, Marvel’s collections department probably isn’t in a hurry to set the precedent. Plus, that last Omnibus was timed to capitalize on the release of Fox’s movie (and the prior two omnis to the other two Fox movies), but there’s no other more widely publicized FF media forthcoming after the 2015 reboot bombed.

Marvel will likely continue to trickle out FF MMW volumes and Epic Collections, but it would be a true shocker to see them schedule the Omnibus with no outside factor motivating it. Maybe there’s a chance to see it if Marvel does a big relaunch of the title, but I wouldn’t hold my breath.

Want to read it right now? Easily done thanks to Marvel Masterworks volumes – see The Fantastic Four Guide for  the details on those and other collections. 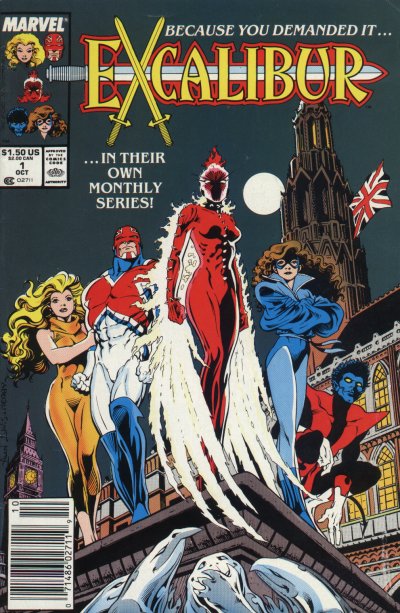 Probable Contents if “Volume 1”: Excalibur: The Sword Is Drawn and #1-34 or 41, plus Excalibur: Mojo Mayhem and Excalibur: Weird War III

What is it? Chris Claremont and Alan Davis were at their best on this light-hearted British take on the X-Men that allows Nightcrawler and Shadowcat to blossom and introduces Captain Britain to a wider US audience.

Is Excalibur my favorite comic book series of all time? Yes. Is Excalibur a punny delight and the first time X-Men characters had ever been so consistently charming? Also yes. Were Alan Davis’s pencils dreamy perfection that deserve oversize treatment? A third yes.

(Would it give Captain Britain the longest uninterrupted chronological run of oversized appearances of all single characters other than Wolverine, starting from 1976? I think this is also a yes, but I’d have to double-check to be sure.)

If you’ve never heard of Excalibur, don’t worry. Despite branching from the gap-filling Uncanny X-Men run at #16 on this survey and having a cast anchored by Nightcrawler and Kitty Pryde, it was never treated as an X-Men family title until years later. Excalibur existed in its own bubble of the Marvel Universe by virtue of being set in England, and aside from a brief foray to New York for Inferno this run remains blithely unaffected by other happenings in the Marvel Universe.

This run begins with Nightcrawler and Kitty Pryde convalescing at Muir Island and Brian Braddock mourning the apparent death of his sister Psylocke (in Uncanny #225) along with his lover, the faerie woman Meggan. They assemble as a team when an inter-dimensional mercenary named Gatecrasher lives up to her name in an attempt to capture Rachel Summers before her Phoenix powers can wreak any havoc on the multi-verse. Meanwhile, Phoenix encounters the vicious Warwolves, creepy silver canine assassins who sometimes wear their prey’s skin.

Claremont and Davis borrow heavily from concepts that Davis introduced as the illustrator of Captain Britain’s UK-only years (some of which were penned by Alan Moore), including the idea of a multi-dimensional Captain Britain corps anchored to a hub of all realities called Otherworld. Even as Excalibur’s plot strays from evading the Warwolves, it never stops being about inter-dimensional tensions and the potential threat of the Phoenix Force.

This volume includes a lengthy (some would say “overlong”) Crosstime Caper that saw the team hop through multiple realities. Later, all of the threads culminate in Davis’s extraordinary solo run writing and illustrating #42-50, which is an underrated classic and should have been the final word on the Phoenix Force (fuck you, Avengers vs. X-Men).

Both the Excalibur Classic and Excalibur Visionaries trade paperback lines didn’t exactly set the world on fire with sales, which has left us with two small-but-unfortunate coverage gaps – #35-41 and #68-77 (though #71 is in Fatal Attractions). Am I as excited to see already collected material re-tread as I would be to see a gap-fill TPB for either of those or an Omnibus of the eminently readable #104-125 and associated mini-series? No, but I’d still buy this in a heartbeat.

As for marketability, just call it “X-Men: Excalibur” and make sure Nightcrawler is front and center on the cover and you’re probably fine – Marvel has never needed a movie to have an excuse to sell an X-Men collection, and Fox already has the rights to this (maybe sans Captain Britain?) if they really want to do it.

This seems like a major longshot, not only for its obscurity but because we’ve seen other X-Men content that’s ripe for collection (and there’s a few more still left!). However, with X-Men – and Claremont X-Men in particular, there’s always a hope.

Want to read it right now? Excalibur is completely covered through 100 save for 13 issues – quite an achievement for a less-popular book! Hit the Excalibur Guide to read how you can grab this run in Classic and Visionaries trade paperbacks.