This is my first box of indie comics, which previously appeared on this channel just to my right back in the old studio. If I reshelve *everything* that used to be out it will eat up over half of my remaining shelf space! Do I have the willpower to keep any of it in storage, or even *gasp* sell it?

This is the second half of my trawl through box 1096, labelled “Marvel Events.” Which events make it into one of my coveted shelf spots? I’m sure at least one will surprise you. Everything inside of it is covered on my Marvel Events Guide.

I’m back with my first officially shelve, store, or sell evaluation – and, it’s on a box of Marvel events not major enough to merit an OHC (either from Marvel, or from me chasing down one for my collection.) Everything inside of it is covered on my Marvel Events Guide.

After a few months of percolating, I’m excited to share a new video series with you – inspired by my massive moving video of getting all of my comics moved into our new house.

Join me as I play a long game of “Marry, F*!#, Kill” with hundreds of collections and thousands of individual issues from my “stacks” – the 140 short boxes of material that mostly haven’t seen the light of day since 2017 or even earlier!

I read so many comics last year – some would say an inadvisable amount. Most weeks I read more than 55% of all of the new single comics out in the American market.

Why? Why spend all the time and money on this when I could spend it on something else? I wanted to be able to say that just once I spend an entire year immersed in comics the way people immerse themselves in films or TV or music, listening to every possible thing to come out with a holistic view of the industry across an entire year.

So many people undertake that mission in other creative endeavors, but when it comes to comics no one delves deep for the stuff at the margins at the big two, the indie titles without industry buzz, the small publishers trying to break through.

This was my year for it. I may never be able to do it again, and no one else may ever cover quite as much of the new comics out in a single year as I did this year! I’m proud I stuck with my mission, and thrilled to share with you the ten comics that excited me the most this year, month in and month out.

END_OF_DOCUMENT_TOKEN_TO_BE_REPLACED

I’ve already told you about 100 of my favorite titles of 2019 this week, but now it’s time to share my TOP 25 COMIC TITLES OF THE YEAR! I recommend every title in my Top 125, but these are the titles I MOST STRONGLY endorse. I thought nearly every issue from these books was great.

Here’s a wild fact: over half of my Top 25 are books I would have NEVER touched if I stuck with my usual pulls and favorite creators. Getting out of your comfort zone is a good thing. I’m happy I got out of mine, and I hope my list helps you step outside of yours.

Let’s go! (Or, if you prefer a Twitter countdown, start here.)

FRIENDLY NEIGHBORHOOD SPIDER-MAN (Marvel) focused on Spidey as a hyper-local hero. This was a friendly, witty Spider-Man who was out to learn all of his neighbor’s names (and their problems, too). Tom Taylor with artists Juann Cabal + Ken Lashley told his mix of arcs and 1-shots all set within a few square blocks of NYC. He delivered hilarious spider-quips as well as tear-jerking emotional beats, which made this feel like the most classic take on Peter Parker we’ve seen in years. 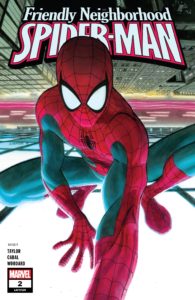 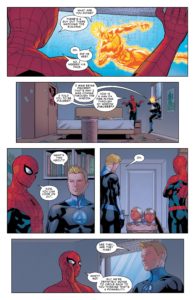 PUNKS NOT DEAD: LONDON CALLING (IDW) continued the uproarious adventures of the ghost of Sid Vicious and the Extra-Usual Affairs department out to exterminate him. David Barnett tied his sequel’s plot in a humorous (and scary!) bow with delightful pop art from Martin Simmonds. This sequel focused more on family and history than the gag-filled first series, but that didn’t slow down the stream of British pop culture and pop music references. 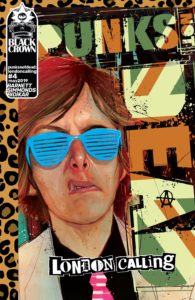 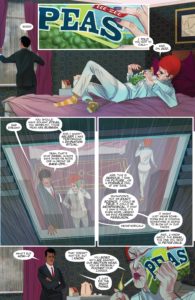 DAREDEVIL (Marvel) is a revelation. Chip Zdarsky began with awesome street-level action, but pivoted hard into Matt questioning what it means to be a hero (and Kingpin questioning what it means to rule). We’ve seen so many deconstructions of Daredevil over the years, but this version of Matt as a flawed, doubtful, plainclothes human being struggling to accept responsibility for his actions was riveting stuff. 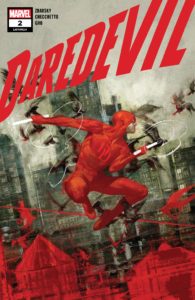 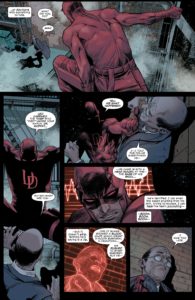