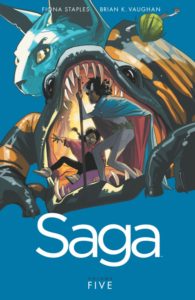 Happy unofficial end to summer that is really just an end to wearing white pants, because really no one wanted to see you in white pants.

Okay, you probably either already know about that or don’t care, so I’ll stick to the topic. This post covers all of the collected comics and graphic novels out this week. It is more than just a list because I’ve researched each book to give you the context. It’s a guide to what each collection is about and what you might want to pick up to get there.

This is an odd week for comic collections – one obvious blockbuster, a few interesting entries, and a lot of things I’m not so familiar with. I suppose it’s not the best idea to ship a big bounty right after a holiday and with schools and colleges back in session? As a reminder, Amazon is sometimes 1-2wks behind the direct market on these releases.

If you’ve never read Saga before, it’s an unusual series that can’t be entirely summed up. It’s worth it to try the first bargain-priced trade, which introduces this ragtag group of regular people, bounty hunters, and robotic royalty. Plus a truth-diving cat.

Truth be told, I found the last trade of Saga to be a bit flat – high on acrimonious domesticity and everyone was awful to each other. Space-faring was grounded and terrible choices took center stage, as did Alana as she starred in a popular interplanetary soap opera. Yes, really. I know that’s the story Vaughan is telling, but I don’t like stories with no one to root for. While that still might be the case in this trade, now everyone is coming together (Gwendolyn! Lying Cat! Prince Robot!) and I think we’ll get a hint of the broader plot in store for us. In Vaughan’s other landmark series we’d be at about the halfway point, but he’s said he intends for this to run longer than Y The Last Man and Ex Machina (both highly-recommended!), so who knows where we might wind up from here?

I’ve heard nothing but effusive praise from my adult friends on this cartoon about adventures, identity, and consent. After turning their My Little Pony license into a machine and watching BOOM! have a breakout hit with Adventure Time, I think IDW knows how to make this a success. The interesting thing is that I get the feeling is still slightly under the radar – it’s not an Adventure Time sized hit already, nor does it have as much content and fandom amassed as when that comic began.

Now let’s take a look at what Marvel, Dark Horse, DC, IDW, Image, Valiant, and other publishes have in store for us this week! END_OF_DOCUMENT_TOKEN_TO_BE_REPLACED