Want to learn more about the Marvel Omnibus editions that already exist and the issues they cover? My Marvel Omnibus & Oversized Hardcover Guide is the most comprehensive tool on the web for tracking Marvel’s hugest releases – it features every book, plus release dates, contents, and even breakdowns of $/page and what movies the books were released to support. END_OF_DOCUMENT_TOKEN_TO_BE_REPLACED 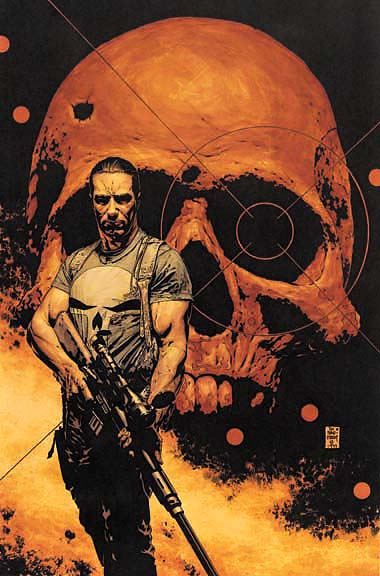 Few characters chart the changing trends of the Marvel Universe as well as Frank Castle, The Punisher.

Punisher was initially introduced in 1974 as a vigilante foil to the rule-abiding Spider-Man. Punisher was a former marine who felt that any killer deserved death themselves, and that he would mete it out regardless of the progress of the justice system. Of course, Spider-Man did not remain in his sights for long, but Punisher was a quandary for the wallcrawler – was this man a hero he could team up with or a villain he had to stop?

The question was consistent with Marvel’s mid-70s output, which had begun to diversify its heroes and ask more challenging questions of them. However, that was the only space the Punisher could hold at the time – being a challenging question. There was no room for him as a star.

One of his prominent early-80s appearances was in Frank Miller’s Daredevil, who at the time was himself seen as a boundary-pushing vigilante. However, by contrast to the Punisher, his actions still seemed heroic. While he sometimes acted as a judge and even a jury, he never cast himself as an executioner.

By the mid-80s, violent heroes were on the rise at Marvel, and Punisher finally earned his own mini-series in 1986. That was quickly followed by one ongoing series, then two, then three – plus a regular flow of graphic novels and seasonal specials. By the height of his popularity and of comic speculation in 1992-93, Marvel releasing nearly as many pages of Punisher as they were Spider-Man. Yet, the later 90s were not kind to Frank Castle. The entire Marvel line had shifted towards the more extreme as well as massive game-changing gimmicks. Punisher’s edgy relaunch in 1995 (literally branded as part of the “Over the Edge” line) didn’t fare as well, and a pivot to having him be a supernatural avenger is one of the most reviled comic stories of the late 1990s. It seemed that Punisher had finally become irrelevant.

Frank Castle’s great savior was Marvel’s movement toward realism in the early 2000s, which was partially aligned with the leather-clad heroes in Fox’s first X-Men film. The Punisher drafted off this movement with  “Welcome Back Frank,” which found Castle more grounded than ever in the hands of Preacher creators Garth Ennis and Steve Dillon. This gritty no-superheroes take on Punisher grew so popular that it spun off into it’s own out-of-continuity Punisher MAX series, which finally felt like the right format for the violent hero. He still had a role to serve in the main Marvel Universe, acting as a major instigator in the landmark Civil War, which mirrored Punisher’s own origin with heroes taking the law into their own hands.

Punisher now represents less of a shocking thread of violence and more the chance for Marvel to publish a comic in a different genre from its capes and spandex fare. Rick Remender found a way to make Frank Castle both more horrific and more lighthearted (if you can imagine), while Greg Rucka turned him into a on-the-streets mob book that could withstand an occasional intersection with Spider-Man. He even joined a team for the first time with the 2013 reinvention of Thunderbolts.

Punisher spawned a pair of films in 2004 and 2008, but he joined the Marvel Cinematic Universe in 2016 with Netflix’s Daredevil. With his exposure to the wider (and voracious) Marvel viewing public, he will likely remain a prominent feature in Marvel’s publishing line. END_OF_DOCUMENT_TOKEN_TO_BE_REPLACED