Before 2012 the word “Uncanny” had always been a mutants-only adjective at Marvel and The Avengers franchise included relatively few mutant members. 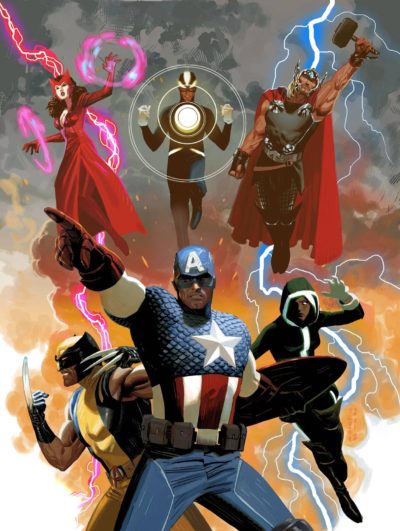 That all changed in the wake of Marvel’s massive Avengers vs. X-Men crossover in 2012. The flagship book of their new Marvel Now line-up was Uncanny Avengers – a greatest hits combination of the most recognizable members of both teams, all striving to maintain Professor Xavier’s message of unity and the Avenger’s mandate of protecting the Earth.

What felt like an uneasy alliance to start began to feel more natural with 2016’s All-New, All-Different Marvel. Maybe that’s because the book felt less like X-Men problems pasted onto the Avengers, or maybe it’s the mix of characters – now also includes of The Inhumans.

The third volume (there was a brief second one after Axis) jettisons the idea that the team must be comprised entirely of major stars like Wolverine and Thor and leans hard into Rogue as the central character. It rotated more Avengers in and out of the mix, plus brought in Deadpool and then Cable (the latter of whom has always been a great partner and foil to Rogue when they occasionally bump up against each other, as they did early in Mike Carey’s X-Men Legacy run).

Now, over half a decade since their debut, Uncanny Avengers feel like their own institution distinct from their pair of parent franchises. Who knows how that feeling will be affected by “No Surrender,” mega all-Avengers crossover in early 2018 that will see all of the books merged down to a single Avengers weekly title.
END_OF_DOCUMENT_TOKEN_TO_BE_REPLACED

News of Marvel’s post-Avengers vs. X-Men plans has leaked, and it’s everything a fan could hope for – major creator changes, new titles, and an intact sense of Marvel’s over seven decades of superhero continuity! 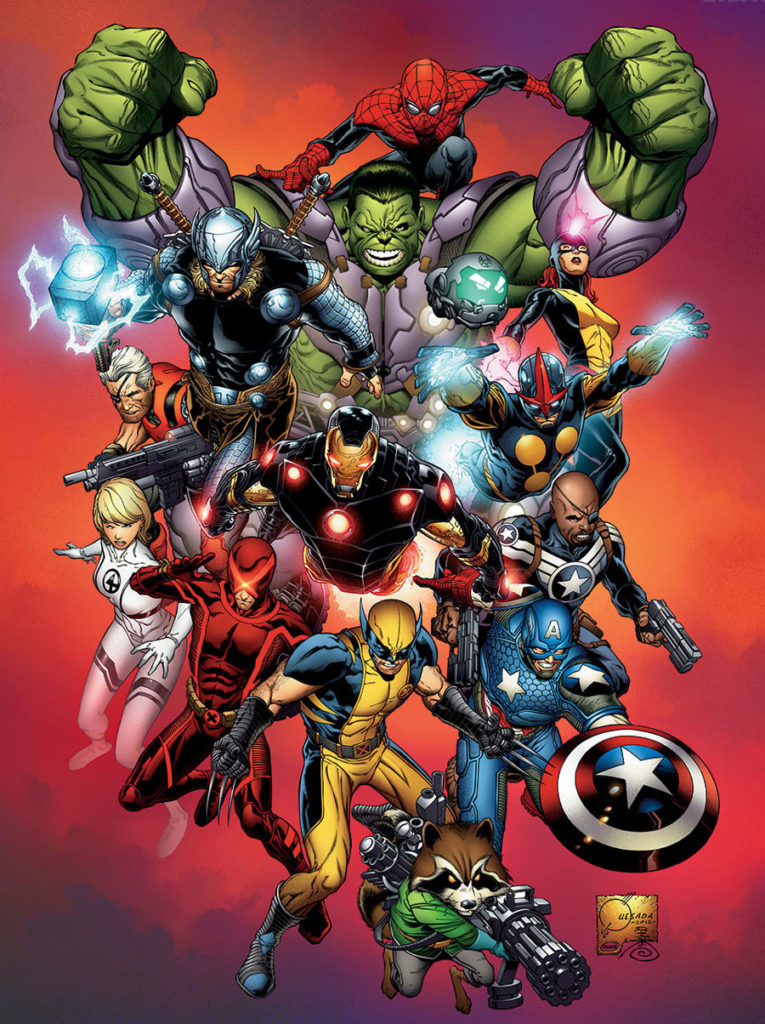 A sneak peak at the future of Marvel from the pen of Chief Creative Officer Joe Quesada.

How are they doing it? With Marvel NOW! – a relaunch of one new title a week for five months – 22 new books to stand along some long-running favorites. The official news breaks later today on EW.com, but it hit the web last night.

There are other rumored changeovers not covered by EW – namely, Bendis on Guardians of the Galaxy, Frank Cho on Wolverine, Ed McGuinness on Nova, Matt Fraction on Fantastic Four, plus Uncanny X-Men writer Kieron Gillen talking the helm of Iron Man. Plus, already-announced changes like James Asmus on Gambit, and Kelly Sue DeConnick on Captain Marvel starring Carol Danvers.

What does that mean for readers? Let’s take a look.

Marvel currently runs five Avengers titles separated by blurry lines, and it sounds like some of them will end this fall to make way for this twice-monthly monster.

Hickman is the Marvel architect that reinvented Fantastic Four as a smash hit with a story that spanned 50+ issues and more than quintupled the core cast, but still resolved into several brief, funny arcs. He’s also the author and designer of some mind-bending creator-owned work like Nightly News and Pax Romana.

Now he’s unleashed on one of Marvel’s two big teams, with reportedly 18 characters in a mix of standalone adventures and cosmic smashes. Plus, his one potential weakness – a slowly unfolding meta-story – will be aided by an accelerated ship schedule – already a success on The Amazing Spider-Man.

This is the Avengers everybody wants to be reading after the movie, and it marks an even bigger cast and more prominent role for Hickman, who has yet to misfire. It’s going to be awesome. 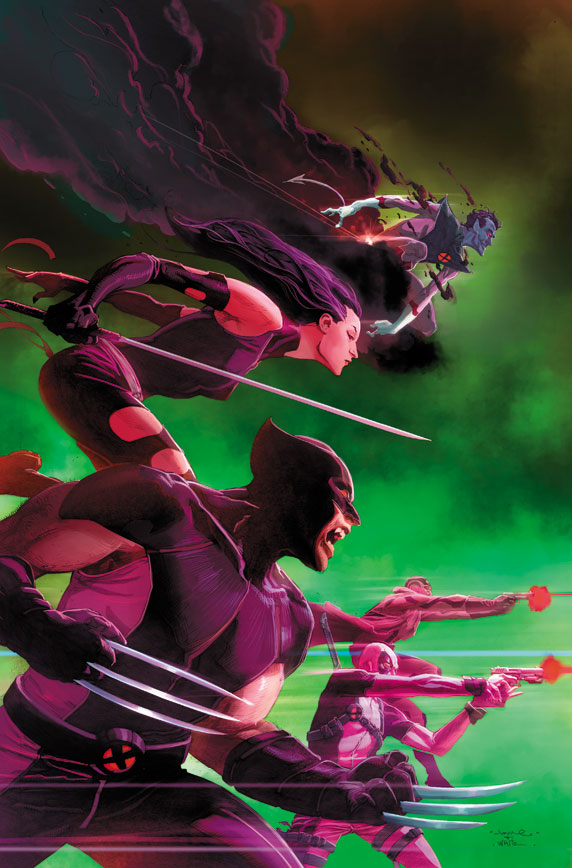 Remender’s Uncanny X-Force has been a hit since day one, especially because it focuses equally on its cast instead of only featuring Wolverine.

Holy total status quo change, Batman! While The Avengers have had their share of mutant members, Wolverine is the only full-time X-Man to stay with the team for any length.

Now Remender is getting all sorts of X into the Avengers, bringing them X-Men’s traditional adjective along with a team that reportedly boasts Wolverine, fan-favorite Rogue, and First Class star Havok alongside Captain America and Thor.

No one is better for this job than Remender. After bubbling under on a solid run on Punisher he exploded on Uncanny X-Force, a stunningly grim and hilarious take on Wolverine’s secret execution squad. It sent readers into endless fangasms when its first year concluded with the epic Dark Angel Saga. Now Remender in the saddle of what will unarguably be Marvel’s flagship title, with all of the star power of the Marvel Universe at its disposal.

In late-breaking news, art star John Cassaday of Planetary and Astonishing X-Men will be joining Remender, at least for the first arc.

Says Remender:  “In 1943, Arnim Zola, who was this bio-fanatic engineer, recorded the Red Skull’s consciousness, and set it to wake up 70 years later. So the Red Skull [in Uncanny] is right out of 1943-44. Prime Nazi scumbag. In his mind, he’s taking that vitriol and hate and Nazi horror and methodology, and pointing it at the mutant species.”

For everyone who argued if the Avengers or the X-Men was Marvel’s Justice League, here’s the answer: it’s both. This is about as huge as a single Marvel comic can be, both in characters and creators.

All New X-Men by Brian Bendis

Fans both love and loathe Avengers impresario Bendis, who has steered the line for nearly a decade. He’s introduced a consistency and gravitas to the once meandering Avengers, bringing them to prominence and expanding a single book to a line of five. He also has steered Marvel’s snappy Ultimate Spider-Man title since day one. But he’s a slow, decompressed storyteller who relies on a lot of talking heads and domestic scenes, and he uproots long-running plot threads for his own plans.

The community buzzed with heartbreaking rumors that he would be wresting control of the entire X-line from beloved authors like Remender, Gillen, and Aaron, but this move is a total left-turn from there! Bendis gets a single X-book, with a time-displaced team of the original five X-Men made popular in every form of media – Cyclops, Iceman, Beast, Angel, and Jean Grey!

This is the best possible weapon for Bendis – fan favorite characters in a new context that’s not a side-universe. It lets him tell stories fans love without the interference they loathe.

Marvel is shaking up its existing architects, with four of them shuffling titles and Rick Remender seemingly replacing Ed Brubaker.

With Avengers vs. X-Men involving the reality-bending Phoenix Force fans have feared the worst for the post-event landscape; fans would riot if Marvel conducted a DC New 52 style full-line reboot. However, if this is the tone the soft relaunch of Marvel will be taking, it looks like readers will have plenty to celebrate.

Marvel’s development over the past few years has been steered by five major authors – Marvel Architects. Brian Michael Bendis on the entire Avengers line; Matt Fraction on Iron Man, Uncanny X-Men, Thor, and The Defenders; Jonathan Hickman’s ground-breaking run on Fantastic Four and cult Secret Warriors; Jason Aaron on Wolverine and his integration into X-Men, and Ed Brubaker on all things Captain America.

It looks like Brubaker is stepping down from his Architecture role, and Remender is stepping up! Meanwhile, a new class of fan favorites like Kieron Gillen, Ed McGuinness, Christoph Gage, and James Asmus has been racking up excellent runs and major sales. If Remender’s move to Uncanny Avengers is any indication it looks like this under-bill of writers is about to step into the spotlight.