The Inhumans comic books definitive issue-by-issue collecting guide and trade reading order for omnibus, hardcover, and trade paperback collections. Find every issue and appearance of all of the Inhumans Royal Family – like Black Bolt and Medusa – plus newer characters like Ms. Marvel and Moon Girl! Part of Crushing Krisis’s Crushing Comics. Last updated November 2018 with titles scheduled for release through January 2019.

The Inhumans were a creation of the Stan Lee and Jack Kirby run on Fantastic Four, yet another uncanny spin on a common sci-fi tropes. They’ve stuck around for over 50 years due to the power of love, a well-timed re-launch, and an unparalleled space epic all paving the way for them to become one of Marvel’s marquee franchises.

In their initial arc of Fantastic Four #45-48, the Inhuman Royal Family were presented as deposed rulers of a secret nation, currently resided in New York. That explained why their queen, Medusa, was a collaborator in The Frightful Four! 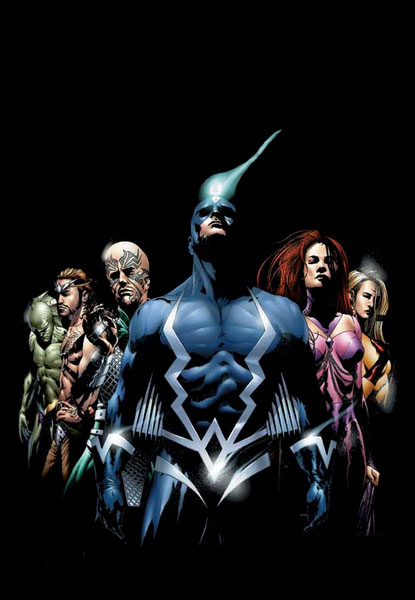 The family’s true home was hidden in the depths of the Andes Mountains, where they had perfected the art of genetic engineering to grant superpowers to every member of their society. In contrast to this evolved race, their despotic current king Maximus employed a fleet of Alpha Primitives – a sort of devolved neanderthal – against the Royal Family.

That could have been the end of the Inhumans’ story – especially because the end of their arc happened to be the debut of Silver Surfer, a prohibitive Silver Age classic that could easily eclipse other solid stories.

Yet, the Inhumans hung on, largely due to their female cast members. Crystal became a love interest of Human Torch and a replacement member of the FF when Sue Storm was pregnant with Franklin. Medusa also continued to appear, as both friend and foe.

The Inhumans were a particular passion of Jack Kirby’s; he would return to both write and illustrate them in the anthology series Amazing Adventures in 1970. They even merited their own series in 1975, written by Doug Moench (of Moon Knight fame).

Past that, the Inhumans were relegated to guest star status – mostly with the Fantastic Four – through the 90s. Crystal became their breakout character, graduating from the FF and dating Human Torch to The Avengers and marrying Quicksilver.

The modern era of The Inhumans began in 1998 with a stellar 12-issue maxi-series from Paul Jenkins and Jae Lee. This series presaged the darker tone of early-2000s Marvel Knights titles, and focused on every aspect of the race’s embattled society. The series acted as a soft reboot of the Inhumans, who would star in a pair of additional mini-series through 2003. However, outside those series, their appearances were still scant.

That all changed in 2006 thanks to two developments.

First, Brian Bendis’s inclusion of Inhuman King Black Bolt in The Illuminati, would permanently raise the character’s profile and make him an essential tool for writer Jonathan Hickman in his run on Fantastic Four and Avengers from 2009-2015.

Second, the Inhumans’ Silent War during Civil War launched them onto a path that would intersect members of the X-Men and the Annihilation story that launched the modern Guardians of the Galaxy. The intersection, called War of Kings, is a seamlessly executed space epic that combines superheroes, palace intrigue, and massive space battles unlike anything else in Marvel’s history.

As a result of the combination of those eight years of  developments, The Inhumans were perfectly poised as a new franchise for Marvel in the wake of their Infinity event. In 2014, they received their own mini-event, “Inhumanity,” as well as their first ongoing series, Inhuman, and their first standalone spinoff hero, the new Ms. Marvel – Kamala Khan. Plus, Inhumans were highlighted in TV’s Agents of SHIELD, culminating in a major arc in 2015.

In the wake of Hickman’s Secret Wars in 2015 their influence in the Marvel line expanded even further, with multiple books and a strong influence on major events in the Marvel Universe.

The tricky thing about the Inhumans is that from their introduction in 1965 through 1998 they only had their own ongoing title two times (both in the 70s) plus a handful of one-shots. Their mythology frequently moved forward during their various guest appearances, especially in Fantastic Four.

This guide tracks the appearances of the Inhuman Royal Family from their introduction in 1965 through the beginnings of War of Kings in 2007. From 2007 on, it continues to track all major limited and ongoing Inhumans titles.

END_OF_DOCUMENT_TOKEN_TO_BE_REPLACED

Today, Marvel and writer Brian Bendis broke the news via Time Magazine that at the end of the currently-running event “Civil War II” the mantle of Iron Man will be taken over by a 15-year old black MIT student named Riri Williams 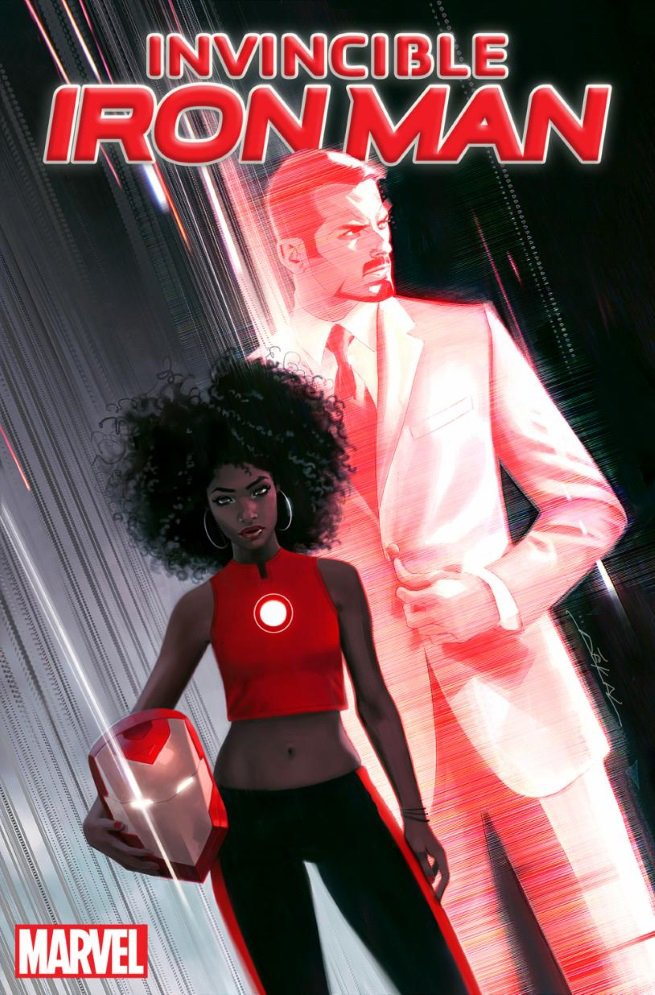 is a major shocker, because the vast majority of fans assumed Riri’s introduction in the pages of Invincible Iron Man (visit the guide) – where she was reverse-engineering Tony Stark’s armor – was a set-up for her to take over the mantle of War Machine. Rhodey has become unavailable to carry that title due to the events of Civil War.)

Riri Williams as Iron Man is a very good thing. We do not have enough female heroes or heroes of color, and to see a that in a character who is both as she takes over the mantle of ostensibly Marvel’s most popular single hero outside of Spider-Man is a huge, visible step not only for Marvel comic readers, but for their film fans who this news will surely reach. To have Williams also be a female super-scientist when Marvel generally boasts only a handful is even more wonderful.

(The most prominent female geniuses of Marvel are Kitty Pryde, who is frequently shown to be nearly as genius as Beast; Valeria Richards, whose preternatural intelligence is partially attributed to super powers; the new Moon Girl; and Mockingbird, an oft-forgotten PhD) .

So Riri Williams as Iron Man is a good thing, right?

On the face of it, yes. Inclusion means representation. I love reading books about heroes that are women, and so does my daughter – also a girl of color.

However, there are some aspects of this character choice that have given some fans and critics pause, which I’d like to discuss here – three in particular. I’m very interested in your input. (Edited to add: Here is a post with similar critique from black writer Son of Baldwin, Here is another from black female nerd BlerdGurl.)

1. Minority legacy heroes are only useful until the original makes their return; then their marginalization can be worse than the average minority hero.

“Legacy Heroes” is a term applied to heroes that are the replacement or junior version to their original heroes. They are sometimes used by creators as an opportunity to change the gender or race of the character bearing the main mantle.. The easiest examples to give are from DC comics (Superboy, Batgirl, Wondergirl, etc), because Marvel simply isn’t known for this practice outside the past few years.

Let’s stick with Marvel, for the moment. For a brief time in the 1980s, Tony Stark could not serve as Iron Man and Rhodey Rhodes took over the title. Rhodey is the best possible example of a Legacy Hero – he was a dynamic, well-developed character long before he became Iron Man, and that means that he was able to continue to be featured even when Tony Stark returned. 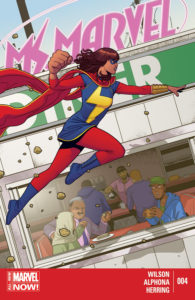 As War Machine, he’s lead his own title on many occasions (though they are usually short-lived) and he’s and been a significant character in both comics and now films (though he’s frequently sacrificed as a narrative reason to make Stark feel bad, as has happened twice this year alone).

His time as a Legacy Hero made him more visible, but after being Iron Man he didn’t stay an A-level hero. The white guy bumped him.

Another terrific example is the relatively new Ms. Marvel, the Pakastani-American Kamala Khan (visit the guide). Kamala is a wonderful analog to the original Spider-Man as a new, unsure hero, and Carol Danvers is very unlikely to ever retake her “Ms.” hero mantle now that she is officially Captain Marvel.

Her books sell ridiculous amounts of copies and have been nominated for Eisners. She’s now an Avenger. Things are going well … but we’re only in year two.

There are examples that don’t go as well. At the end of the comics version of the original Civil War, Captain America appears to die, and Bucky takes over the mantle as Cap (visit the guide). His days as Cap are amazing – great, layered storytelling. When Cap came back they shared the mantle for a while before Bucky was spun back to being Winter Soldier, at which point he began to sink back into obscurity – and he’s a white guy who stars in movies.

As with War Machine, he’s now a character Marvel needs to periodically kickstart into a new title or team only to watch him sink again.

Despite those concerns, check out the amazing list of Legacy Heroes Marvel is currently fielding: END_OF_DOCUMENT_TOKEN_TO_BE_REPLACED