Today I bring you an updated guide of a character who tended to operate on the fringes of the Marvel Universe until he got pulled into the MCY via Agents of S.H.I.E.L.D. – The Definitive Guide to Deathlok.

Deathlok is a character who is really eight different characters. Maybe it would be easier to describe him as a concept – a lot like The Terminator. Did that pique your interest? Before you head to the guide, get the short story on Deathlok, including where he’s been recently and what amount of his comics have been printed in collected editions to date.

END_OF_DOCUMENT_TOKEN_TO_BE_REPLACED

Ready to dig deep into the extreme 1990s? END_OF_DOCUMENT_TOKEN_TO_BE_REPLACED 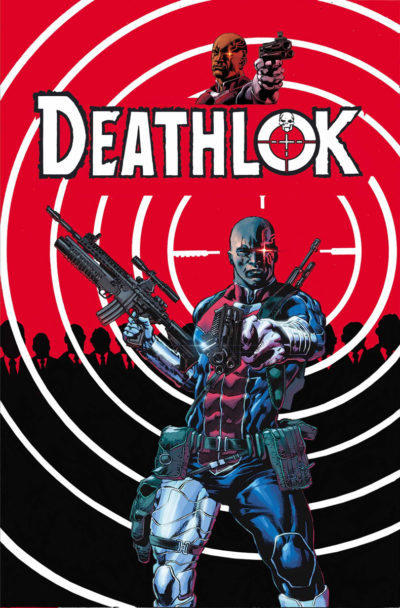 Deathlok has a curious history in the Marvel Universe.

The character was originally introduced in 1974 as Luther Manner, an American soldier reanimated in the future as a cyborg and then sent back to the past Terminator-style (but, years before the first Terminator movie!). This time-displaced Deathlok I [CBDB] has made only limited appearances after his initial run of stories in the 70s and 80s.

After the appearance of a short-lived, all-robotic Deathlok II [CBDB], third and fourth versions were introduced in rapid succession. Deathlok III [CBDB] was John Kelly, whose human brain interfered with his Deathlok mission and was promptly terminated.

Deathlok IV [CBDB], Michael Collins, replaced Kelly as the consciousness in that unit and anchored his own series – struggling to contain the more murderous urges of his cyborg body’s programming.

Late in that series, we meet Deathlok V [CBDB] – present-day Luther Manning. An unrelated Deathlok VI [CBDB] is introduced as part of a 1990s X-Men crossover meant as a launching-pad for a trio of tech-focused heroes.

With Deathlok appearing in Marvel’s Agents of S.H.I.E.L.D. television show, the core concept of a human soldier made into a killer robot seems to be entrenched firmly in Marvel’s narrative. A new title was launched with Deathlok VIII [CBDB] to more-closely align to the show.

We even met a female version in 2013 – AKA Deathlocket [CBDB] – in Avengers Arena (but she’s not tracked in this guide). END_OF_DOCUMENT_TOKEN_TO_BE_REPLACED