This book is funny, unique, and looks freaking brilliant. Artist Martin Simmonds is simply incredible, drawing a real-seeming Britain with amped up color and clever use of cut-and-pasted patterns to ground it in real, textured reality. I am in love with this book, and will not only be keeping up with it, but also checking out other titles from Black Crown. END_OF_DOCUMENT_TOKEN_TO_BE_REPLACED 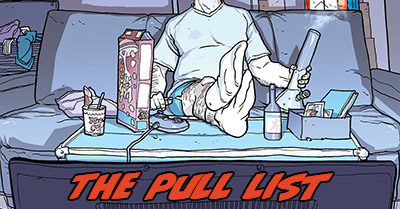 Welcome back the The Pull List, where I review every new comic I digitally picked up this week that wasn’t X-Men?

I’m still a few weeks away from being caught-up on non-X Marvel books, so my reads were restricted to some young DC titles, DC’s first “New Age of Heroes” launch, and Tom King’s Batman – which I mostly stay caught up upon for the hot takes.

END_OF_DOCUMENT_TOKEN_TO_BE_REPLACED 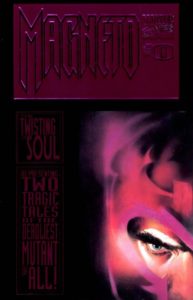 It took 20 years from Magneto to go from his first titled comic to his own ongoing series!

There are certain Marvel characters that you probably assume have had at least one ongoing series after four or five decades, but they can sometimes surprise you. As an example, Black Widow didn’t get her first ongoing series until 2010 despite being around since the 60s.

Magneto falls into that category for me. When his series was announced as “his first ongoing title” at the end of 2013, I did a double-take – fifty years and no ongoing? Yet, my comic collection tells me it’s true: the Master of Magnetism has had a handful of mini-series and one-shots, including his first – a beautiful, foil-covered affair that I have in mint condition somewhere in my attic.

Once that surprise wore off, cynicism wore in. Author Cullen Bunn has been hit and miss with me on his Marvel work, and his hits have been female-driven stories in The Fearless and Fearless Defenders. What could he bring to a Magneto whose motivation and powers were both feeling a little watered down from him playing second string to a resurgent, insurgent Cyclops for the past few years? Would this simply be a movie-fervor cash in with a hunky Fassbender style Magneto staring moodily off into the distance and pulling out people’s fillings?

Yesterday I caught up with the third volume of his edition… 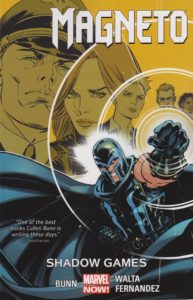 This is a chilling, down-tempo masterpiece of anti-heroic deconstruction. The only time I was tempted to put it down is to think about it before I turned another page! Cullen Bunn is making Magneto more fearsome and more human than ever, and it’s a compelling read.

The cleaner of Fernandez’s art in the first issue are a welcome site as the focus is on the mysterious Briar, wherein Bunn plays a Morrison-like game of building a sub-culture around villainy. If there were super-villains in your world, wouldn’t you be scouring flea markets for DVDs of their greatest destructions after the footage was pulled from YouTube as supporting terrorism? Would people be proud of their scars or angry? This is one of those perfect issues that implies those questions without every verbalizing them, and which deepens the suddenly quite-fascinating mystery of Magneto’s mysterious human benefactor.

Afterwards, Walta continues to lend a weariness to Magneto’s chapters with his sketchy lines portraying a certain rough-edged weariness, which Jordie Bellaire has long-since perfected a color pallet to accompany. Here we see Magneto turn on SHIELD after cooperating with them briefly in Uncanny X-Men. What follows is more interesting. Magneto is re-building some semblance of society on Genosha out of a lingering guilt that he’s let his species down. How to even choose the occasion of his deepest regret? Was it the slaughter just perpetrated by The Red Skull on the island? Or perhaps the genocide of millions of mutants in Morrison’s E is for Extinction. Or, were his failures manifest much earlier – during his first overt strike on US missiles during his original encounter with the X-Men and in his guilt for surviving the Holocaust? Some Nazi and Holocaust imagery here is truly nightmarish, but only once does it feel present purely for shock value.

What’s so fascinating is that all of our flawed protagonist’s decisions feel right – it’s what you might choose in the position of a beleaguered former super-villain, right down to the shocking final choice he makes to resolve the volume.

Bunn’s dissection of Magneto’s extended history feels inspired by James Robinson, who carefully disassembles all things Golden and Silver aged to construct his stories. Maybe Bunn was capable of this all along and never had a character with a rich enough tapestry of stories to draw from. Either way, against all odds Bunn has made Magneto both a nuanced character and a must-read series. If you’re not already excited for him to helm the next volume of Uncanny X-Men headlined by Magneto, then you absolutely must read this book!

What came before: Magneto, Vol. 1 – Infamous