DC has gone all-in on Batman in their line-wide relaunch, with a total of eleven Bat books. Add to that Batman in Justice League and Harley Quinn in Suicide Squad and you’ve got thirteen books of bat-adjacent characters.

That makes Batstuff fully a fourth of DC’s entire schedule of relaunch!

Of course, right now Batman is bigger business than ever before, coming off of a critical and box office smash movie and a high-selling and acclaimed comic run.

Can DC continue the magic? And, on a more personal note, can they bring me to care about a hero I’ve always been cold to? 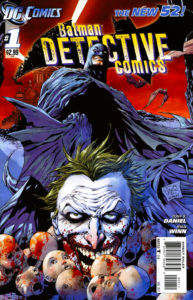 In a line: “This is a violation of my civil rights. A man should be able to slaughter in peace.”

Detective Comics re-debut is a visceral thrill that forces you to linger on every panel.

For new fans, this issue tracks almost perfectly from the closing frames of Nolan’s The Dark Knight, wisely tucking away any dissonance in the Batman universe for other titles to handle. As with Dark Knight, the Joker is the star of this issue, and every panel of his pale white form is both rewarding and nauseating.

Batman himself is relatively flat here – but this isn’t a book about character revelations – it’s Detective Comics, and it lives up to that name entirely.

Given how quickly the ending will send you back to page one, I have high hopes that the remainder of the arc will include several more circuitous turns.